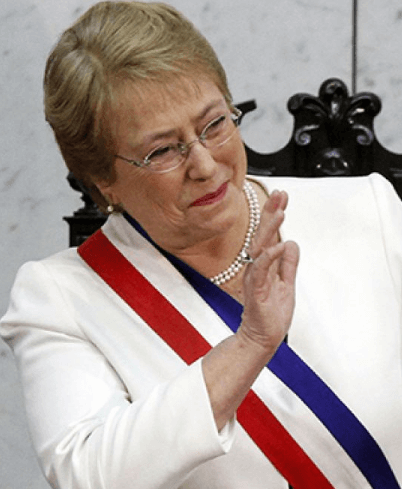 Since 1990, when Chile returned to a democracy, women’s educational achievements, workforce participation, and legal rights have improved. Chile legalized divorce in 2004 and in 2006 Chilean politician Michelle Bachelet became the first woman president of Chile. However, Chilean women still face many economic and political challenges, including income disparity, high rates of domestic violence and lingering gender roles.

María de la Cruz, (1912–1995) was involved with women’s rights and suffrage in politics, as well as being a journalist, writer, and political commentator. In 1953, she became the first woman ever elected to the Chilean Senate.

In the late 1940’s women’s issues were embraced by First Lady Rosa Markman de Gonzalez Videla, who encouraged women to work and participate in politics through various organisations.

Amalia Errazuriz de Subercaseaux was an upper-middle class Chilean who introduced the Liga de Damas Chilenas (League of Chilean Ladies) in the 1960’s to “uphold and defend the interests of those women who worked for a living without attacking the principles of order and authority” with other organisations following her lead and politics.

Another of the women’s rights organisations was Amanda Labarca’s ‘Ladies Reading Club’ that believed all women should be educated and have a more influentially productive role in society and politics, regardless of their socio-economic status.

In the 1960’s, campaigns for the Christian democrats emphasized women and women’s issues as a way of capturing the women’s vote. The Christian democratic change of government created policies giving women access to birth control and modernised women’s organisations. These underlying issues of gender hierarchy, neglected women in poverty.

Carmen Gloria Aguayo revolutionised the mother’s centres in a move away from the traditional view of motherhood, heading the Christian Democrat party’s women’s departments to initiate policies for maternity leave, equitable pay and occupation and new opportunities for training and learning.

Currently, women in Chile have many of the same rights as men. The National Women’s Service (SERNAM) is one of the state organisations charged with protecting women’s legal rights in the public sector.

Working women on low-income receive subsidised child care through legislation passed in 1994. A 2007 bill gave mothers had direct access to child support payments. In 2009, presidential campaigning led to equality reforms including maternity leave, flexible work schedules and job training. Female workers not working in the formal employment market and without an employment contract do not receive paid maternity leave.

Women were granted the right to vote in 1931 (in municipal elections) and 1949 (national elections).
On December 1, 1971 thousands of women who were against the newly elected socialist Salvador Allende marched through Santiago to protest government policies in the ‘March of the Empty Pots and Pans’.
When Allende was ousted in a military coup in 1973, patriarchal values returned to government and women’s legal rights fell behind most of Latin America. Chile returned to democracy in 1990 and the government began investing more on politics and economic resources to expand social welfare programs.

The National Women’s Service (SERNAM) was founded in 1991 and is one of the organisations created by the state to draft executive bills concerning women’s rights.

Centres for research include The Women’s Study Centre and La Morada. The Women’s Study Centre is one of Chile’s non-profit organisations founded in 1984 that conducts research, trains women, and tries to increase women’s participation in politics. La Morada is another of the non-profit organisations that works to expand the rights of women through involvement in politics, education and culture to eradicate violence.

In 1945, Gabriela Mistral was the first Latin American to win the Nobel Prize for Literature. Other notable female authors from Chile include Isabel Allende, Marta Brunet and more.
In 1999, Gladys Marín and Sara Larraín were the first women to be presidential candidates in Chile. The year before, Marín was the first person in Chile to charge Augusto Pinochet for crimes committed during his dictatorship.

Michelle Bachelet is serving as the first woman president of Chile since 2006 with half her cabinet female. Bachelet has increased the budget of SERNAM and her administration haw an active role in furthering opportunities and policies for and about women, creating or improving child care, pension reform and breastfeeding laws.

In the 2006 election, Soledad Alvear, a Christian Democrat, ran for the presidency against Bachelet. She is also the woman responsible for organizing and structuring SERNAM.